Lucy Campbell and Libby Johnstone are dynamic vocalists blending their gifts to create a unique Classical/Crossover sound.  Forming the duo of Eden, their musical background with operatic range vocals and Classical sound has been expanded to include a varied repertoire of Classical as well as Modern selections, including Theatrical, Rock and Pop genera.  Creating and producing their own arrangements, this Classical/Crossover allows Eden a broad range of appeal with an interesting mix of sounds.  Eden has performed worldwide as well as booking the inaugural sail of the Celebrity Cruise ship, The Reflection.

Approaching the girls about chatting with us for a feature, I found them to be fun and down-to-earth.  Their take on life is just as refreshing as their take on music.  Beautiful and talented, Lucy (with the gorgeous dark locks) and Libby (amazing red hair) answered a few questions and gave us a peek into their journey.  View their showreel below and experience for yourself their amazing talent!

First off, thanks girls for taking time to share with us!  It seems you are in process of your second album launch along with performing dates; you have a lot of things going on!  So, let’s get started…

Can you share a little about your background…have you always been musically inclined?  Did you know early on that music was something you wanted to pursue?

Lucy: I have been involved in the arts from the age of 3. My elder sister is a dancer and she has always been my inspiration.  Unfortunately the day before my 13th birthday I had quite a bad car accident, breaking over 10 bones down my left side. This put a stop to my dancing career, but it also made me start to pursue singing.  After some time recovering I spent hours every day singing, I found it very soothing and it helped to aid my recovery both physically and emotionally. From that day forward I have sang every day and spend every moment loving it.

Libby: I knew I always wanted to sing, but it took me a while to find the style of singing that I was best suited to. I was painfully shy growing up so I didn’t start singing lessons until I was 16 and just leaving school so most of my time was just spent singing to myself in my bedroom. The first production I ever did was Grease at 16, and I was so shy I didn’t even look out towards the audience. I’d spend my time looking at everyone else on stage. After that I decided to go into Musical Theatre and discovered Phantom of the Opera which made up my mind and decided I needed to improve upon my confidence. I was also a ballet dancer from the age of 3 up until I was 21, although I didn’t really enjoy it, I got into Royal Ballet when I was young but decided it wasn’t the direction I wanted to go in.

Did or are you currently undergoing any specific training/education?

Lucy: I did a BTEC in Contemporary and Popular Music, but apart from that I am pretty much self-taught.

Libby: After I left school I did a BTEC National Diploma in Musical Theatre for 2 years and then auditioned for drama school in London straight away and got into the London School of Musical Theatre. 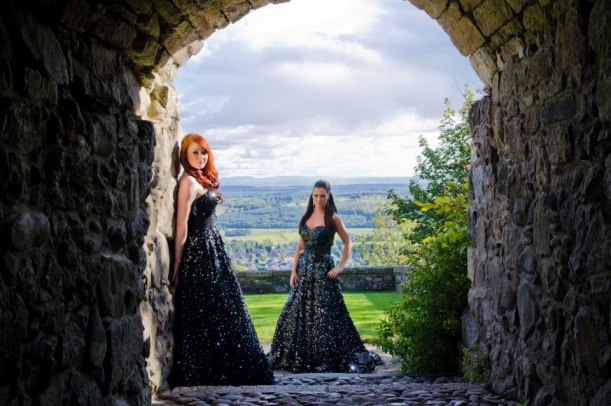 Can you share a bit about how each of your careers in music started, how the duo formed and came to be known as Eden?

Lucy: My career has been rather varied, from pop girl bands to heavy rock bands, but I have always had a love for classical music. With Eden I feel like I have found my home.

Libby: As a child I played piano, clarinet and the violin so I was always very musical, but I was lucky that as soon as I graduated from drama school I landed pantomime straight away up in Scotland and it just went from there. Lucy and I actually met for the first time in St. Lucia after working for the same company for many years but never ended up meeting. I started the duo nearly 3 years ago, and the name came from my friend Matt, we were trying to think up a name and couldn’t settle on anything. He was literally reading out random words from a magazine such as “table” and “lamp” as a joke, and then he came up with Eden. It was the first name I didn’t hate, and it stuck! Eden was originally a way for us to work in-between auditions so we didn’t have to do another job, but we found we loved it so much it became a full time job and eventually we started going to auditions less and less until it completely stopped. 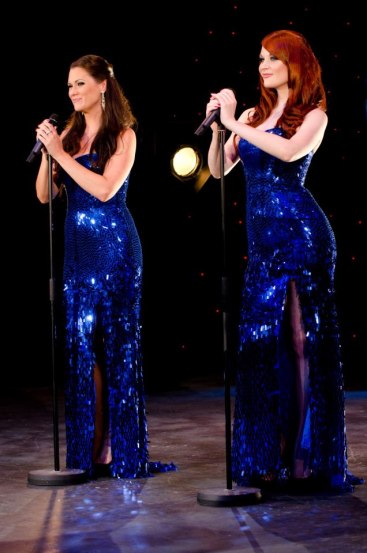 Your sound is classified as Classical/Crossover…is this the style you started out as and how (if any) has it evolved over time?

Lucy: In the beginning Libby and I set out to work mainly in the cruise ship market, so we pushed our first album towards that. I feel that our next album is the true Eden sound. We have such a love for every song on the album and we hope that it is a good progression from our first. We have a few wild cards in there, but they are our faves.

Libby: Yeah originally we were very Classical/Musical Theatre  with some Michael Buble, Celtic Woman influences thrown in, we tried to appeal to what we though people wanted, whereas now we’re actually thinking about the music we like to listen to and how we can incorporate that into the show. It’s definitely changed as we’ve gone on; there are a lot more Pop and Rock influences now.

Can you share a little about how the song selection takes place?

Lucy: It tends to happen fairly organically. One of us will suggest a song and we decide between us whether we think it is going to work or not. We are always coming up with new ideas.

Libby: Usually the songs we come up with happen if we’re just listening to our iPods and we think it would be a good idea. 90% of the time we agree on the songs, sometimes we come up with a song, and try it but it just doesn’t work.

Any influences musically that have impacted your sound or in the way you like to pursue performing?

Lucy: I always used to sing along to Celine Dion when I was younger. She is a great artist and I would love to see her Vegas show.

Libby: Recently we’ve incorporated a lot more Rock music into our sets which is a great thing for me, I love bands like Metallica, Velvet Revolver, Linkin Park, Bon Jovi,  but there is also a lot of 80’s music in there as well which is also a huge favourite of mine, especially Boy George.

Any Influences who have supported you personally when it comes to your career?

Lucy: Not yet, but we are hoping. 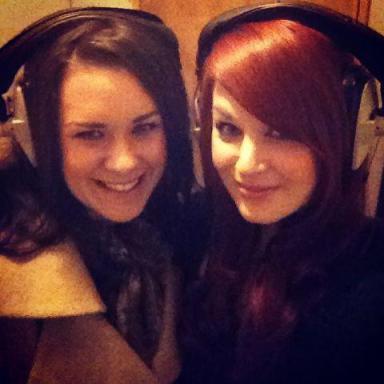 You recorded your debut album with the Royal Scottish National Orchestra; with a second one on the way…how was the recording process?  Anything significant you learned along the way?

Lucy: The recording process is long but very rewarding. We have learned to make sure we eat a lot during our recording sessions and to trust in what we believe. Everybody has an idea for what you should be or how you should sound, but as long as you are confident and believe in what you are putting out, then you will end up with a product you are happy with and hopefully others will agree.

Libby: I think we’re both a bit impatient with how long it actually takes, but it’s definitely worth it in the end.

What is your favorite thing about being involved in the whole music experience?  What gives you the most satisfaction, enjoy the most, and frustrates the most?

Lucy: I just love the performance aspect of the job. Being on stage you can totally lose yourself in the music and be anybody you want to be. It’s a great form of escapism. The most frustrating thing for me is the waiting for things to happen. I want everything right now and have got to learn to be patient.

Libby: Definitely the performance side of things as well. I love being able to share music that we’ve had new ideas for with people and hearing their reaction. You get an idea straight away of whether you’re on the right track or not and if people like it.

Advice for someone starting out pursuing a musical career and looking to progress into recording?

Lucy: Always record yourself. Even in rehearsals. Sometimes you pick up on mistakes you are making, and it helps you to get used to hearing your voice back and making the right tone choices for songs.

Libby: Try and get as much experience as you can early on and perform in front of an audience. There is a huge difference between rehearsals and the actual show itself, so get used to performing in front of a crowd and try filming yourself so you can watch it back and make adjustments from there. That way you will always improve and be able to see what works and what doesn’t.

Libby: Classically, of course people like Katherine Jenkins/Russell Watson/Il Divo, but for an alternative collaboration I’d love to work with someone like Linkin Park, I think it would be a great sound, similar to Evanescence. 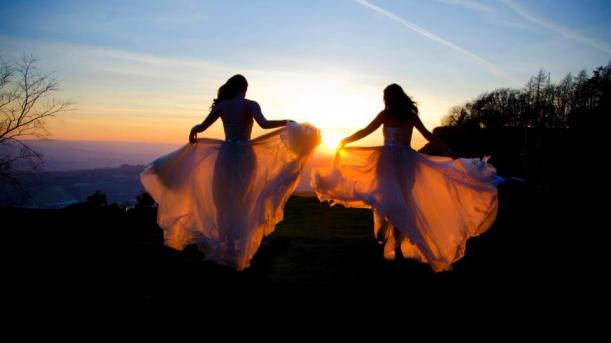 Where would you like to see yourself down the road career-wise?

Lucy: As long as I am making a career out of music then I am happy. I wouldn’t mind being a mega star though; I could live with that lol.

Libby: I think I’d like more people to be aware of us, and to perform in shows on a bigger scale than we do now would be nice, but we just have to see what happens.

You both act as patrons for the U.K based charity, Primary Education for All providing primary education in developing countries.  Can you share how this came about and any significance it holds for you?

Lucy: We were contacted by PEFA and we took a lot of time looking into it, making sure it was the right charity for us. It is an amazing cause, giving people the basic key skills required for day to day life.  It gives opportunities and opens doors for all involved. 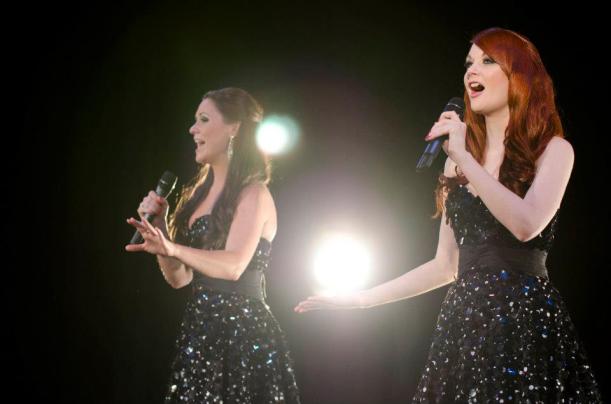 We are mostly working outside of the UK so far this year, but we have a couple of UK 2013 dates that we are really excited about.

Eden‘s music is available at iTunes and CDBaby!

Sounds like some amazing events coming up!  Thanks again ladies for chatting with us!  Now, before we head out, one last little gem!!

Libby: Doritos… everyone on twitter always teases me about it, I’m obsessed!

5.  Tell us something we might be surprised to know?

Lucy: I used to be the lead singer in a Pop/Metal band and I can squish my nose completely flat to my face – gross

Libby: I used to swim professionally and came 9th in the UK for under 16s in backstroke.  I also used to work as a medieval wench at Warwick Castle, it was so much fun! I literally used to prance around in costume doing nothing; I always used to get told off as it was so hot wearing the costume that I used to bring in a small fan with me. Apparently it wasn’t “medieval” enough. 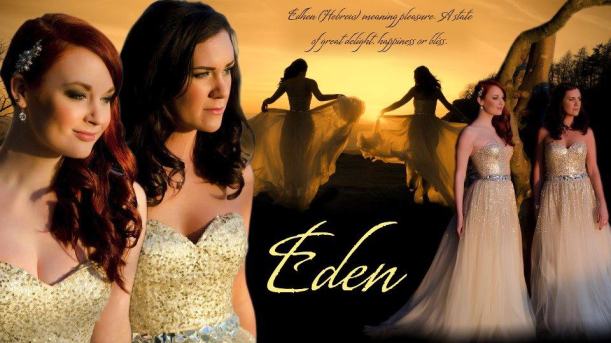