Catching Up with Actor Seth Peterson…

There are places I remember..all my life, though some have changed. The melodic sounds of the Lennon/McCartney penned In My Life was the opening theme to one of my favorite long running NBC Network television series titled Providence.  The show centered on a young plastic surgeon named Dr. Sydney Hansen, played by Melina Kanakaredes, and the misadventures of her family members.  Younger brother, Robbie, was a likable gent who in spite of his kind heart, usually ended up in some type of unseemly financial situation.  The relationship between Sydney and Robbie was heartwarming, frustrating and touching.  Providence’s Robbie was my first introduction to the wonderfully talented actor, Seth Peterson.

Although I became acquainted with Seth’s work from Providence, many of you may better recognize him as Nate Weston from USA Network’s Burn Notice, acting alongside Jeffrey Donovan, Gabrielle Anwar, and the always remarkable Bruce Campbell.  And, if it happens that you are not acquainted with either of these shows, but there still seems something familiar about Seth, truth is, he doesn’t just happen to have one of those faces.  More than likely you have seen him appearing in one of your favorite shows.  Seth has made appearances in countless television series across the years.  His IMDB (Internet Movie Data Base) page looks like a smorgasbord of popular television viewing. So, when I had the opportunity to visit with Seth, I jumped at the chance of being able to bring At a Glance a firsthand account of his acting journey.  This fun, friendly guy shared about his acting, his recently published book of poetry and his amazing Twitter addiction.  Read on to see what he says about these topics and more in our exclusive interview!

Hey Seth!  Thanks for chatting and sharing a little about yourself!  We are interested in getting to know you better, so how about where you were born and spent time growing up, favorite pastimes and any particular hobbies?

I was born in New York. There is some question as to where exactly, but the latest rumor is Manhattan.  When I was one year old, my mother decided to move to the West Coast with her best friend Bibbie Hansen, she’s my Godmother.  Here’s a pic of her and Andy Warhol!  I grew up all over different parts of Hollywood and L.A.   As far as hobbies…I love my Lakers, writing poems and occasionally songs and haikus.  I just released a book of my poetry called #Eclection.  I caught the poetry bug from my father, George the fourth!  I’m a huge fan of spy movies.  James Bond is the best of course!  I play a bit of guitar and saxophone.  I’ve played in several World Series Of Poker events, love chess and I’m completely addicted to the show The Walking Dead!  But most recently I’m a shameless Twitter addict. Follow me if you dare!  @SethPetersonLA  But be warned, I love sarcasm!

When did you know you wanted to be an actor?  How did you get interested and get your start?

I knew for sure I wanted to be an actor the second I got out of high school.  My step-father always told me there’s no such thing as a free lunch.  Hah!  Free lunch EVERY DAY on set 🙂 !!

Did you undergo any education/training and if so, what aspect do you think benefited you the most?  The least?

I trained for nine years while working in a bank part-time.  I could’ve been a doctor by the time I got my first job 🙂  My mother and Godmother were founding members of a theater called The Colony Theater.  That’s where I did my first play.  The Skin Of Our Teeth was the name of the production I did there. I started with several acting coaches but Manu Tupou became my first mentor. He trained for 15 years under the finest teachers: Lee Strasberg, Stella Adler, Uta Hagen, Harold Clurman, Sanford Meisner.  He was a Senior Member of the world famous Actors Studio (New York and Hollywood).  He starred as Chief Brombden in the Broadway production of One Flew Over The Cuckoos Nest.  He was also a Prince of Fiji,  a fascinating man who had an amazing alternative to the Sense Memory method  he originally learned, only to create a new method less “mentally harmful” than the ones taught by his predecessors.  My next mentor was Anthony Barnao.  He taught a more conventional style, much more conducive to actually getting work in Hollywood.  Without his help I never would have gotten my first job. He’s a dear friend as well as my manager.  I put those techniques together and I took what I thought to be the best of everything I learned and mashed them together.

What is your most favorite thing about acting?  The worst?

My favorite thing about acting is doing live theater  The exhilaration is unmatchable.  The direct feedback from the audience is priceless. It makes you so aware of what connects with people.  There is nothing in this business that equals its honesty!  When a live show starts, anything can happen and there are no second chances. It’s pure magic!  You have the freedom to breathe life into your character as it becomes painfully clear what’s organic in that moment, which changes from show to show.  My least favorite thing about acting is the audition process.  One take and you’re out the door for the most part. Very frustrating.

What was your favorite character/role played to date and why?

My favorite role was playing Billy Bibbit in a Los Angeles production of One Flew over the Cuckoo’s Nest.  It was directed by Manu Tupou!   Having him direct me in the role was amazing. Probably my most honest and gritty work to date.  Later I had the opportunity to work with Brad Dourif on Deadwood.   He was nominated for Best Supporting Actor in the role of Billie Bibbit opposite Jack Nicholson.  Brad graciously signed my copy of the film.  I sometimes collect autographs from my favorite coworkers. If they’re awesome!

What would be your dream role?

Do you have any type of personal routine when you are filming on set?

My personal routine on any set would start with a breakfast burrito, everything on it with extra cilantro and a cup of coffee.  Ironically I don’t drink coffee unless I’m on a set 🙂  Then I brush my teeth and run my lines through my rehearsal app2  and  get to a “center”,  a clear space void of tension via some exercises I’ve picked up over the years.  After that I head over to the set listening to whatever music fits the scene I’m currently working on, as Meisner suggests.

Any interesting set stories you can share?  Did you keep any mementos from any of the sets you’ve worked on?

One of my favorite stories was playing Burt Reynolds’ son in a western called Hard Ground.  He pulled his “gun” filled with blanks out on the director and told him if it were real he would shoot him 😉 !!  Gotta LOVE Burt!!! As far as mementos… I collect some of my favorite props such as but not limited to a wooden Indian from Robbie’s bar from the NBC series Providence.  That’s in my sunroom.  Nate’s sunglasses from the USA show Burn Notice, and I also have a pretty killer scrap book or two 🙂

Any advice to share for someone starting in this field?

My advice for newcomers in the field – theatre, theatre, theatre.  A great acting coach is a massive foundation. But theater is where you really hone your craft. Plus it’s cheaper than acting class as it can actually make you money instead of costing money.

You recently had your first publication, #Eclection.  Was this type of project something you’ve always thought about doing?  Can you tell us a little about your writing process and inspiration?   Will we see more works like this from you?

Yes. As I stated earlier, I wrote this poetry book called #Eclection.  It’s a book of 48 of my favorite poems and 2 pages of what I call “Random Thoughts” I wrote throughout my life. My heart and soul is in that book.  I also had the pleasure of dedicating it to my beautiful family, Kylee, Fenix and Lennon!  ❤  I wrote it because I post a lot of my poetry on Twitter and several of my followers requested I compile them into a book. So I did just that!  🙂  I’m incredibly happy with it!  It quickly became a top twenty best seller on Amazon!  I sure have a LOT more poetry.  I can make another book, but I’m satisfied with one for now 🙂

What about me might surprise you?  Well, my life is kind of like a sitcom.  Everywhere I go, there’s always something fun happening.  I love interacting with everyone I can in the silliest way possible.  Most people love it, some just stare blankly.  Not sure all those people speak English however 🙂  I get some awesome reactions from them!  It’s like a living comedy of sorts.  I get into a lot of adventures.  Nuff said :))))  I also used to be in a graffiti crew as a youngster and I spend a lot of time with my 92 year old grandmother 🙂  She’s amazing!  ❤  Love you Grandma!!!!!  Oh… I’m blood brothers with the musician Beck🙂

Thanks again Seth, for making time in your busy schedule to chat!  Before we head out, how about a round of Fast Five?!

Which Superhero would you choose to be?  Wolverine!

Define happiness in one word?  Family 🙂

You Can Find Out More About Seth at his Webpage! 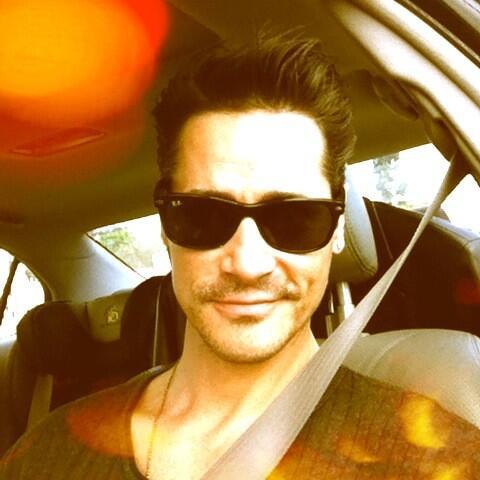