Forward by Jayne:  If you are a regular reader of At a Glance, you will have read our previous related articles on Evora.  I originally interviewed Alan Rickard, front man for the band, and Leeloo did a subsequent CD review.  And then the time finally came for an Album Release Party.  The event was held in Dublin at The Grand Social on June 27, 2013.  Leeloo was fortunate to travel to attend the event and she shares with us her adventures of the evening, including meeting the band consisting of Alan, Ian McSweeney, Jim Morton, Johnny Morton, and Joey Morton.  Read on for Leeloo’s recap…

I remember writing in my last article that I was really excited to listen to Evora’s songs live.  After three months, many diversions, a two hour flight to Dublin and another few hours of waiting, my wish finally came true.

Over a month ago, Evora announced they would be doing a launch gig for their first album, Hurry Up Before I Die.  After many days of looking for someone to come with me, I convinced my friend Davina, and soon we were on a plane to Dublin.

The concert was at 8 p.m.  We arrived at The Grand Social to pick up the tickets at 7:30 p.m. and were told to go upstairs.  On our way up, we ran into Alan Rickard (lead singer of Evora).  He recognized me since he and I had met last November and had kept in touch via twitter (where I had made it pretty clear I was coming to see them and I’m really sorry to all my followers, lol)  He was obviously in a hurry so he told me he would meet me again later.  Davina and I entered the concert room where there were a few tables right in front of the stage.  We ordered some drinks and sat down, waiting for the festivities to begin.

Only minutes before the actual concert was supposed to start (in case you are not familiar with Ireland, punctuality is not their best quality), Alan came to our table to ask if we wanted to meet the band before the concert.  Of course we did.  So, this is how we ended up backstage talking with the guys.  If punctuality isn’t Ireland’s biggest strength, their kindness is simply wonderful.  They genuinely seemed happy to see us, even if we were coming to bother them right before a very important show.  They made us feel welcome and as if we were right where we should be.  You know how you always fantasize about meeting people you really like, well meeting Evora met all my expectations and beyond.  Five really nice and caring gentlemen, if you ask me.  It doesn’t hurt that they are immensely talented.  Ian was kidding around and Johnny was impressed that we flew all the way from Paris just to see them.  They even applauded our grand gesture even though in the end we were the lucky ones.  Their friend, the very charming Greg, took some pictures of us with the guys and after wishing them good luck (not that they needed it) Davina and I went back to our seats.

At 8:20 p.m. Stevie Cliff took the stage.   I had heard one song from him (I never come unprepared) and I must tell you that on stage he steals the show.  Always interacting with the audience while explaining the motives for his song, Stevie is also an excellent guitarist and a wonderful singer.  His music, sometimes light and sometimes more serious, was a real revelation.  I encourage you to go to his website, enter you name in the mailing list, and receive some free songs.  He promises not to spam you 😉

As a second act, Liza Flume entered the stage.  She looked nervous but once she started singing, I was mesmerized by her voice.  Sweet yet powerful, she went from song to song like it was a dream.  She also has a mailing list you can join to get free music.  You won’t regret it, I can assure you.

At around 9:15 p.m. Evora finally arrived.  You could tell they were impressed by the number of people there to see them and they were having a hard time covering the smiles showing how glad they were to be on stage.  For almost an hour they sang every song from their album.

The band clearly seemed happy to be together on stage and it was contagious.  The whole room shouted and clapped as the songs went on.  This album, even though already magical on CD, takes a new dimension when played live.  If you were one of the lucky people there that night you could feel that this was only the beginning for Evora.  I videotaped the whole show but when they started singing Fall Away, accompanied by Vyvienne Long at the cello, I had a hard time not shivering.  I have listened to this song so many times but I can’t help being ridiculously happy when I hear it. 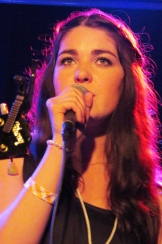 Shannon was there too, to sing Tell Me Your Name and Meet Me by the Water. This girl is so pretty and talented.  As an encore, Evora sang Started to Wish You Well and well is the least I wish them for the future.

After the concert, Johnny came to me, still astonished by the fact that we had come all this way.  All I could tell him was that the concert had been wonderful and that this trip was completely worth it.  I went over to see Shannon as we have been tweeting a few times.  She is such a nice and caring person.  We also talked to Liza Flume and Stevie Cliff.  And then as the band was still celebrating a great night of music, we left The Grand Social, full of wonderful memories.

Here is Evora live from that night as well as the video for their single Tell Me Your Name.  Be sure to check out our previous Features (Tell Me Your Name and Hurry Up Before I Die) for more inside info and pics, as well as Evora’s Facebook page, Twitter and iTunes!  The CD is available through Amazon!

Cold – A film by Eoin Macken

Hurry Up Before I Die – Evora

Tell Me Your Name

One thought on “Evora – Album Launch at The Grand Social – Dublin”