It’s barely been a month since her fairy tale wedding to Tristan MacManus, but the lovely Tahyna Tozzi-MacManus took time out recently from her whirlwind schedule to chat about her new project, The Oren Movie.

As an actress hailing from Australia, Tahyna began her career in the Aussie television series, Blue Water High.  Soon after, she garnered world-wide recognition from her work as the beautiful Emma Frost in the Feature Film X-Men Origins: Wolverine.  With other projects helping bridge the way, Tahyna is now branching out to be both writer and director of her debut Short Film, The Oren Movie.

Thank you so much for sharing, Tahyna!  What an amazing time for you right now, I’m very eager to hear about your film!  First off, maybe we can start with a little of your background… we’d like to get to know you and your journey better!  How early in life did you realize you were interested in pursuing a career in the arts?

As long as I can remember.  I don’t think there is any other option for me – I did go through wanting to be a marine biologist faze but partly because I thought the film Free Willy was so cool.

You have credits as an Actress/Writer/Producer/Singer/Model…  Did you undergo any education/training and if so, what aspect do you think benefited you the most?

I hate the idea of a slash type of title.  I’m just a creative person and have always been extremely ambitious so I have just gone out to be the absolute best I can be at anything creatively fulfilling.  I have always immersed myself in school and training – I actually have always loved learning.  I still keep challenging myself with that.

Your latest project is a Short Film titled The Oren Movie, which you wrote and directed.  Has film making always been on your agenda?

I never intended to make a film when I first decided to move to Los Angeles but I have always loved films, film making and have loved the concept of storytelling.  It was sort of a natural progression – I had all these ideas that I wanted to do – so in short just went, that’s what I’m going to do.

Can you share a little about the story and where the title comes from?

Without giving too much away, I wrote this story from self-experience and one of the most darkest places of my mind.  I think creativity and darkness go hand in hand sometimes.  The story is that of hope though.  OREN represents that person or thing that triggers something inside you to step away from the world you have created for yourself and make the necessary changes.  I won’t give away the plot just yet – stay tuned though!

How long did it take you to write the screenplay and did it evolve once you started filming?

It took me about 24 hours.  It was so dark the morning I started writing it.  Something my husband said kind of snapped me back to reality and it was like a light bulb went off.  I just started writing and didn’t stop.  It is still evolving now – I have the most wonderful team that have jumped on board and an amazing cast that have inspired me so much.

When developing characters, most writers seem to draw from influences around them.  Did you base any of the film’s characters on any specific individuals from your experiences?

The production of The Oren Movie has been opened up to crowdfunding through Kickstarter.  Was that a given at the beginning of the process or something that developed along the way, and how did you decide to go with this specific program?

What people don’t realize is that films cost money and – a  lot of it.  It takes a whole team of people to make films that need to put food on the table too.  It’s easy to say I want to make a movie!, but the logistical nightmare that comes along with making a film is a different ball game all together.  We are so lucky that today there are great platforms like Kickstarter which allow people in the arts to live out their dreams!

How important do you feel it is for a director to have acting experience?

I think it is very important. Every actor has a different process and are often walking the edge of emotional stability – I know this – it’s me all the time.  I feel like I can be there for my actors for whatever emotional journey they go on because I know that feeling but I can also pull them back to the real world and remind them we are making make believe!

You’ve previously directed a stage production as well…how different did you find the direction for the film as opposed to the theater?

I have directed a theater production of John Patrick Shanley’s Savage In Limbo. He is one of my favorite playwrights. It was my first directorial experience and I had a blast!! – stressed but a blast. Theater is a totally different medium to film – the two are just as fun as each other but there is something very electrifying about the instant rush of theater. 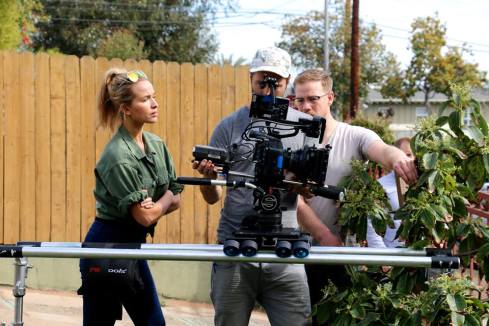 I am particularly interested in your work, as it seems that women tend to be in a minority in this industry when it comes to wearing the different hats you have taken on.  How do you see the industry in this light and its outlook for the future?

I think women are standing very strongly on their own two feet in this industry whether we are recognized for it or not.  I have surrounded myself with incredibly talented women who are so creative and so driven. I’m all about girl power.

What has surprised you the most out of this experience to date, and what are you most proud of?

How much I truly love the process of writing and see it come to fruition – it’s an incredible feeling.  I am most proud of my team behind me and all the work they do!  With myself I wouldn’t say proud – I keep pushing myself to see how far I can go.  I hope one day I can be like – good job Tahyna now just chill.

Do you see yourself staying in this industry or are there other avenues you would be interested in pursuing at some point?

I have no idea – I hope I can keep storytelling.  Whether that’s acting, writing or directing.  I would like to pursue motherhood and cooking a great baked dinner at some point too.

Advice for anyone who may be looking to embark on a similar debut film journey?

Just do it.  Believe you can and surround yourself with people who inspire and push you.

Any inspirations for your work or your path in general?

My mother, my sister, my friends and my husband.

I have three films being released this year that I am acting in.  They are The Last Light, Julia and The Ever After.  I am very excited about those because each character was in total contrast of the last.  Some other projects are in the works but I am tight lipped about those for the moment.

Tell us something about you that might surprise us to know!

I love Disney cartoons – I know them all by heart.

Thanks again for sharing your passion with us, Tahyna!  As more information becomes available, I’ll be following the progress and will update here on this page!  I’m Looking forward to discovering the significance of the film’s tagline, From the Mud Grows the Lotus!  Until then, everyone can find out more via the film’s Facebook, Twitter and Kickstarter!   Good luck and congratulations again on your wedding!  May you and Tristan be blessed with love and true happiness!

Favorite food indulgence?  Fries, bread and butter, chocolate.  I love food – I wish I didn’t so much

Last song/band you listened to? My sister’s band Van Hoorn

Define happiness in one word?  Husband

One thought on ““From the Mud Grows the Lotus””